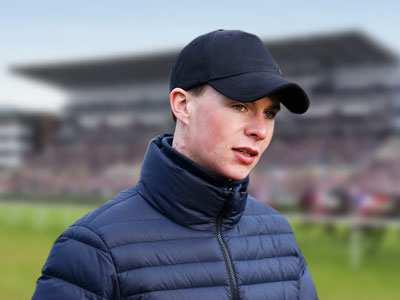 The rising star saddled a brace of Cheltenham Festival winners last term and returns with a talented young team in search of more Prestbury Park glory.

Joseph O’Brien has only been training in his own name since June 2016, but he has quickly established himself as a leading player both in the National Hunt and Flat spheres.

Having quickly risen to finish third in the trainer’s championship to Willie Mullins and Gordon Elliott in his first full season as a National Hunt trainer in 2017/18, last season saw him make further progress.

As well as registering career-best tallies of winners and prize money, O’Brien’s most notable milestone was perhaps his performance at the Cheltenham Festival.

Despite his leading hope Le Richebourg missing the meeting through injury and the exciting Sir Erec being fatally injured in the Triumph Hurdle, O’Brien still managed to saddle his first winners at the meeting under his own name with Band Of Outlaws winning the Boodles Juvenile Handicap Hurdle and Early Doors winning the Martin Pipe Conditional Jockeys’ Handicap Hurdle.

Joseph sat down with Kevin Blake of attheraces.com to discuss his team for the 2020 Cheltenham Festival.

A 138-rated hurdler, he has won three of his six starts over hurdles including the Grade 1 Spring Juvenile Hurdle at the Dublin Racing Festival.

At the minute it looks like he’ll be more likely to run in the Triumph Hurdle than the Boodles Juvenile Handicap Hurdle. It was a bit of a surprise to see him win last time, but the race was run to suit and Barry gave him a great ride. Stamina is his forte and the Triumph should play to those strengths. He would prefer better ground.

A 134-rated hurdler, he has won four races over hurdles this season.

The Martin Pipe looks to be the right race for him if he gets in. I think a big-field handicap will play to his strengths and I’d give him a sneaky chance.

A 136-rated hurdler, he has won two of his five starts over hurdles including a Grade 3 juvenile hurdle at Fairyhouse in December.

It looks like he’ll run in the Triumph Hurdle. He was a bit unlucky the last day. It looked like he was sure to win after Aspire Tower fell and left him clear at the last, but he just pulled himself up. I don’t think he’s ungenuine, it was probably just a shock for him to be left by himself all of a sudden facing into a big crowd. He’s never done anything like that before. Soft ground suits him well.

A 155-rated chaser and 153-rated hurdler, he won a Grade 3 hurdle at Gowran Park and a Grade 2 chase at Navan last season.

The plan at the minute is to run him in the Champion Hurdle. He really enjoys soft ground, so he won’t mind all of this rain we are getting. He ran a better race at Gowran Park last time. In truth, he probably faced a very difficult task trying to give 7lb to Cilaos Emery. We know he stays further, so the likely increased emphasis on stamina in the Champion Hurdle will be a help to him. It would be hard to be confident in him, but I’d be hopeful he can pick up some prize money.

A 141-rated hurdler, he won a maiden hurdle at Naas in November and has run well without winning in Graded and handicap company since.

He’s entered in the County Hurdle and the Coral Cup. We won’t make a decision until late on. I thought he ran a lovely race on his handicap hurdle debut at the Dublin Racing Festival and considering his inexperience, he should come on from that. I’d be hopeful that he can compete in whichever race he ends up going for.

A 131-rated hurdler, he got off the mark at the seventh attempt over hurdles in a maiden at Naas in February.

He has multiple entries in handicap hurdles, but he wouldn’t be sure to get into any of them and isn’t certain to travel at this stage. I think he is capable of competing in a big handicap, but whether he gets his chance to show it at Cheltenham remains to be seen.

A 131-rated hurdler, he has won two of his last three starts including a handicap hurdle at Gowran Park.

Fakir is in the Martin Pipe Conditional Jockeys’ Handicap Hurdle and the Coral Cup. We are favouring the Martin Pipe with him. He was impressive at Gowran Park last time, but the Irish handicapper raised him 10lb for that win and the British handicapper has given him a 7lb higher mark than that, so he’ll have to find serious improvement to compete. That said, he’s a horse we like and he seems to be going in the right direction, so we’ll let him take his chance and hopefully the handicappers will prove to be spot on about him!

A 156-rated chaser, he has won two of his five starts over fences including the Drinmore Novice Chase at Fairyhouse in December.

We are going to Cheltenham with him, but we haven’t decided between the Arkle and the Marsh just yet. All the rain that is around at the minute will be a big help to him. It was a real pity not to get a run into him at the Dublin Racing Festival, but we thought it was best for the horse not to risk him on the ground. We’ve been delighted with all of his runs over fences so far and would be happy to have another go at Notebook if we end up in the Arkle. Wherever he goes, he’s our best chance of the week.

Made a winning debut in a bumper at Limerick’s Christmas meeting and then finishing a head second in a winner’s bumper at Naas in February.

We gave him an entry in the Champion Bumper, but I’d say he’s probably an unlikely runner. If it came up very soft, we’d be tempted to run, but other than that he’s likely to stay at home.

A 135-rated hurdler, he won a maiden hurdle at Cork in November.

He is well entered up in the handicap hurdles, but I’d say the Martin Pipe is the most likely target for him. We had to wait a bit longer than we wanted to give him his latest run, as he was in a few different times only for the meetings to be abandoned. He has looked to improve with each start over hurdles and I was happy with how he coped with the longer trip at Thurles last time. He got snatched up at a crucial moment there and would have finished closer but for that. Inexperience would be the concern for him and he’ll need to jump better than he has so far to be competitive in a race like the Martin Pipe, but he has plenty of ability.

A 119-rated hurdler, he has finished in the frame in all four of his starts over hurdles.

We’d like to run him in the Boodles Juvenile Handicap Hurdle, but it looks as though he’ll struggle to get a run. We’ve been disappointed with him so far, but I wouldn’t give up on him yet and better ground would suit him.

Made it third-time lucky over hurdles when winning a maiden at Thurles in February.

His two main options are the Coral Cup and the Albert Bartlett. At the minute, I’d say we’re favouring the Albert Bartlett. We’d want the best ground possible for him, so the weather forecast closer to the time will likely influence our final decision. He had very good bumper form last season and has improved with each of his three starts over hurdles. He ran well at the Festival last season, so while he’ll probably be a big price, it wouldn’t be a surprise if he ran well.

A 133-rated chaser, he has acquitted himself well without winning in handicap chases this season.

There’s a good chance he’ll run in the Brown Advisory & Merriebelle Stable Plate. Mid-range trips suit him well and I think he has a good one in him when things fall right.

A 135-rated chaser, he has run well without winning in all five of his starts over fences, most recently finishing fourth in a valuable novices’ handicap chase at Naas.

We’d like to run him in the Northern Trust Company Novices’ Handicap Chase, but he wouldn’t be sure to get in. His last two runs have been very solid and he ran well enough at Cheltenham last year, so he wouldn’t be without a chance.

A 142-rated hurdler, he has won two of his seven starts over hurdles.

He has a few entries in handicap hurdles, but I’d say the Coral Cup will be the one for him. He should be suited by going back up to a mid-range trip. He’s been on the go for quite a while, but hopefully there is some more improvement in him and he can run a good race.

A 147-rated chaser, he finished second in four Grade 1 novice chases last season, but has been a bit disappointing this season.

The plan is to run in the Grand Annual. He ran well in the Arkle last year after things went wrong for him at the start. He’s been disappointing this season, but we think better ground will suit him, so we’ll be hoping he gets it.

No thanks, I want to keep the mobile site.