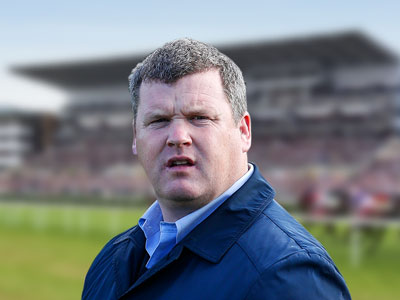 The County Meath maestro is a two-time top trainer at the Festival and his powerful battalion in 2020 includes the likes of Aramax, Delta Work, Envoi Allen and Tiger Roll.

Very few National Hunt trainers in Ireland have risen up the ranks as quickly as Gordon Elliott.

Having burst onto the scene by saddling Silver Birch to win the  Grand National in 2007, at which point he had not trained a single winner in Ireland, he was firmly established as a top five trainer by 2010/11.

He soon emerged as the biggest challenger to the dominance of Willie Mullins and made him pull out all the stops in the trainers’ championship in both 2016/17 and 2017/18, training a remarkable 210 winners in Ireland in the latter campaign.
While he came up just short of Mullins in the championship on those occasions, he did have the satisfaction of being crowned the leading trainer at the Cheltenham Festival in both 2017 and 2018.

Last season saw Elliott secure multiple accolades, but without question the highlight of his campaign was the remarkable achievements of Tiger Roll.

Not only did he gain his second win in the Glenfarclas Cross-Country Chase at the Cheltenham Festival, he made history by becoming the first horse since Red Rum to win two Grand Nationals on a day that will never be forgotten at Aintree.

With Elliott looking to have a very strong team for the Cheltenham Festival, he spoke to attheraces.com’s Kevin Blake to tell us about their prospects.

A 149-rated hurdler, he has won three of his four starts over hurdles including the Future Champions Novice Hurdle at Leopardstown’s Christmas meeting.

He’s in great form and will run in the Supreme Novices’ Hurdle. His jumping has improved as the season has gone on. We feel he hasn’t done much wrong all season and has to go there with a good chance.

A 157-rated hurdler, she is an 11-time Grade 1 winner over hurdles, but her recent form has been more miss than hit.

She’s going to run in the Stayers’ Hurdle and we’ll put first-time blinkers on her there. She’s still not working anything like as well as she was last season. If she doesn’t run well at Cheltenham, I’d imagine it’ll be her last run.

A 134-rated hurdler, he has won two of his five starts around hurdles and got off the mark for Elliott in a novice hurdle at Naas in February.

He won well at Naas the last day and looks an obvious one for the Boodles Juvenile Handicap Hurdle. He’s one that wouldn’t want too much rain. I’d be hopeful there is a bit more to come from him.

A 155-rated chaser, he has won all three of his completed starts in novice chases including a Grade 1 at Leopardstown’s Christmas meeting. He most recently fell when beaten in the Flogas Novice Chase at the Dublin Racing Festival.

At this stage I’d say he won’t travel. If he does go, it’ll be the RSA, but I’d rather not travel him.

A 155-rated hurdler, he made a winning seasonal reappearance in the WKD Hurdle at Down Royal prior to finishing third in the Matheson Hurdle at Leopardstown’s Christmas meeting.

He goes for the Champion Hurdle and I think he has an each-way chance in what is a wide-open renewal. He’s a horse that always works very well at home. He’s had a breathing operation since his last run, so hopefully that will help him show on the track what he shows us at home.

A 136-rated hurdler, he won a maiden hurdle at Punchestown in January and most recently finished a close third in the William Fry Handicap Hurdle at the Dublin Racing Festival.

He’ll run in the Martin Pipe. He ran great at the Dublin Racing Festival considering it was his first run in a big-field competitive handicap like that. He should come on from that experience and two-and-a-half miles will suit him well.

A 171-rated chaser, he has won six of his eight starts over fences including the Savills Chase and the Irish Gold Cup at Leopardstown this season.

He goes for the Gold Cup and I’ve been delighted with his preparation. His jumping has been very good in his last two starts. With a bit of luck he’ll get a clear spin around and if he does, the form book suggests he has a great chance.

A 154-rated hurdler, he is unbeaten in a point-to-point, four starts in bumpers and three starts over hurdles. He won the Champion Bumper at the Cheltenham Festival last season and has added the Royal Bond Novice Hurdle at Fairyhouse and the Lawlors’ Of Naas Novice Hurdle to his tally this season.

I’ve been delighted with his preparation and he’ll have a great chance whichever race he runs in. I’m going to go over and walk the track on Saturday evening or Sunday morning, just to see what the ground is like before declarations for Tuesday. At this stage it is more likely he’ll go for the Ballymore. I think he’ll very much be in his comfort zone at the pace that race tends to be run at. The only thing that would change that is if the ground is heavy, then we’d have to consider switching him to the Supreme.

A 140-rated chaser, he has run well without winning in his two completed starts over fences.

He’ll run in the novices’ handicap chase. This race has been the plan for him for a good while. He’s run well at Cheltenham before and we are looking forward to seeing him run.

A winning point-to-pointer, she made a winning racecourse debut in a bumper at Gowran Park in February.

She’ll run in the Champion Bumper if the ground is on the easy side. She isn’t flashy in her work at home, so it was a pleasant surprise to see her win as well as she did at Gowran Park. She’ll need to improve to run well at Cheltenham, but we’ll give her a chance and see how she gets on.

A 160-rated hurdler, he has won one of his three starts over fences, most recently finishing second to Faugheen in a Grade 1 novice chase at Limerick’s Christmas meeting.

He’ll go for the Marsh Novices’ Chase. He’s been blowing hot and cold this season and hasn’t always scoped right. He’s had a breathing op since his last run. If the ground comes up very soft, I might not run him and wait until Fairyhouse with him.

A 149-rated hurdler, he won the Pertemps Network Final at the Cheltenham Festival last season and has shaped well without winning this season.

He’ll go for the Pertemps Final and will wear first-time blinkers. You’d rather he was lower in the weights and he’ll be vulnerable to an improver, but we’re happy with him and hopefully he’ll run well.

A 134-rated hurdler, he won a maiden hurdle at Leopardstown’s Christmas meeting prior to finishing second in a novice hurdle at Thurles.

The Martin Pipe is the plan with him. He wouldn’t want the ground to be too soft and I think he has a fair chance in it.

A 142-rated hurdler, he won a conditions hurdle at Clonmel in December prior to finishing sixth in the Pertemps Qualifier at Leopardstown’s Christmas meeting.

He’ll run in the Pertemps Final. He has obviously won over fences at the Cheltenham Festival before, but he just wasn’t up to open Grade 1 company over fences which is why we’ve sent him back down the hurdling route. He has had a good preparation and looks to have an each-way chance.

A 171-rated chaser, he has won the last two renewals of both the Glenfarclas Cross-Country Chase at the Cheltenham Festival and the Aintree Grand National.

He’s in great form and we’re looking forward to getting him to the cross-country race. He’s as fit as I can get him considering he hasn’t has as smooth a preparation this season as he did last season. He was so good in the race last year that you’d be hoping he wouldn’t need to be at his very best to win. At the end of the day he’s a 171-rated chaser that’s running in the cross-country chase and hopefully that will show on the day.

A 125-rated hurdler, he won a maiden at Thurles in January prior to finishing third in a rated novice hurdle at Navan.

He runs in the Boodles. He stays well and we’ve had this race in mind for him. I liked the way he shaped at Navan last time. He’ll wear first-time blinkers and I’d expect him to come up the hill strongly.