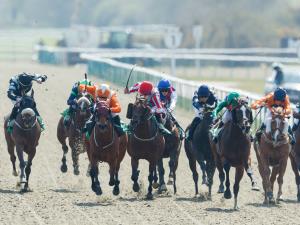 Arena Racing Company tracks could be at the forefront of a return to racing in Britain when the time comes for the sport to resume following its suspension due to the coronavirus pandemic.

Any resumption will be behind closed doors on the Flat, but only when Government advice permits, a point British Horseracing Authority chief executive Nick Rust has again reiterated.

Should there be a heavily quarantined reintroduction, two of Arena’s all-weather tracks are likely to have the facilities required to host such a scenario.

Martin Cruddace, chief executive of ARC, told Racing TV’s Luck on Sunday programme: “My own personal view is we’ll have a position whereby we will be in a heavily quarantined first phase and we would need to make sure the movement of people is kept to the absolute minimum.

“The first phase could and maybe should involve a quarantined, sanitised zone at a racecourse that is able to put on regular fixtures maybe each day, and where the participants do not have to leave that sanitised zone.

“To a large extent we are relying on Dr Jerry Hill and his great team at the BHA and being guided by their advice, but I think we have to be in a position whereby we can meet every possible objection.

“So for instance those that unload the horses from the horse lorry and look after the horses at the stables may be part of the participants that are quarantined, and those that bring the horses to the racecourse do not have a chance to interfere with or infect the quarantined zone. I’m pretty sure we can put all of that in place.

“I think it’s important that the industry realises the amount of detail the Resumption of Racing Group has gone into has been quite significant. I think they are doing a very good job.”

He added: “I should make the point that our first priority is the public health emergency, without a doubt, but that doesn’t mean that we shouldn’t plan for when resumption can happen.

“It’s important to emphasise we can’t do anything without Government consent and that can only happen when the public health situation allows it to happen.

“I think there will be fairly clear indications from the Government in terms of restrictions put in place on movement. It could be areas, we don’t know, and then I think it’s incumbent upon us to say to the Government here is the detailed plan that meets your new criteria and deals as much as possible with every possible public and public health objection.

“I don’t believe we will get to phase two and phase three until we have established the confidence amongst ourselves and within Government that we can deal with phase one and I believe we will do that.

“I can only speak for our tracks, and a lot depends on the conditions the Resumption of Racing Group and the BHA put on what is required – I don’t think the conditions will be anything other than very restrictive, and rightly so.

“If that is the case what you are looking for is probably a hotel on the racecourse, a surface that can take regular racing and also a hotel that can provide 100 to 110 rooms. Obviously if you look at it regionally, we have Lingfield where we have a hotel and we have Newcastle which has a hotel on-site as well.

“So we have two very viable options. We have also been doing our own work, we have a 37-point plan to put in place and we only need two or three days’ notice and we will be up and running.”

On the subject of what the public perception of a return to racing might be in light of the criticism the Cheltenham Festival going ahead has received, Rust said: “We need to be very careful about how we manage the messaging to Government and the public about our return.

“If we show we are looking to go ahead of a reasonable position then that could attract significant criticism and we have to bear that in mind. We are balancing on a knife edge to make sure we return as quickly as possible but with Government onside and the public onside.”

Rust reiterated that Cheltenham had taken place in conjunction with the latest Government advice at the time.

He said: “There’s a lot of comment around and blame around, but you have to put it into context. The decision to go ahead with Cheltenham was taken with Government advice and Government scientific and medical advice.

“Many other activities took place that week, we had a Premiership football weekend beforehand, a Six Nations rugby match on the Sunday, Crufts indoors, millions of people were going down the tube in London.

“The advice was keep going. Then things changed that week. Of course I guess we should be a little bit worried, not necessarily because of the decisions taken around that but because of the perception of it.

“Winding back to the Tuesday of that week, I think if we’d cancelled racing against Government advice at that time for Cheltenham, I just don’t think it would have been the right decision and it would have been widely criticised as being somewhat alarmist.

“But the mood did change that week, Rishi Sunak came out with his budget on the Wednesday and there was a more worried update from Boris Johnson on the Thursday.

“Then quickly we got into the next week on the Monday and things had changed very rapidly straight into limitations on gatherings, drains on public services and a much different mood and scientific message.”