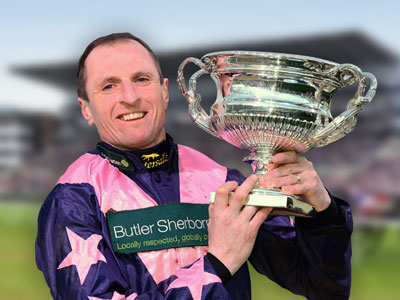 FOXHUNTER IS ONE RACE STILL MISSING FROM MY CV

I was delighted to get the call on Wednesday morning to ride STAKER WALLACE in the St. James's Place Foxhunter Chase. I’ve ridden in the race a few times without success. It’s the Foxhunter, a point-to-point, so it would be nice to have it on my cv.

With J P McManus having two horses in the race, Derek O’Connor had the hard decision to pick one and he went for Minello Rocco who he won a National Hunt Chase on a few years ago.

STAKER WALLACE has been a difficult horse to train for Enda Bolger but he seems to have done well this year. He had a nice run at Naas behind Billaway and then he backed that up by winning a point-to-point at Nenagh. If he puts in a good round of jumping he would be a great ride.

This year’s JCB Triumph Hurdle is a difficult race to call. Aspire Tower fell at the last in Leopardstown at the Dublin Racing Festival when he looked to be going very well. When he fell it looked like Cerberus was going to win but then he idled and A Wave Of The Sea got gifted the race. It’s hard to take that form on.

I really like Dan Skelton’s horse ALLMANKIND. He is a Sea The Moon horse. I thought his performance at Chepstow where he beat Cerberus was really good and he also has form at Cheltenham.

The only problem with him is he seems to race very keenly. If Harry Skelton can control him he has got a great chance.

The County Hurdle is a big lottery with 26 runners. Gordon Elliott has a few. Davy Russell rides THATSY and you would be a little worried over two miles. He seems to stay well.

He had a good run behind Thosedaysaregone at the Dublin Festival. I know he was ninth but he was only beaten the guts of nine lengths and the way Davy Russell is riding this week I would be very confident he is going to sneak this fella into a place.

I also like Martin Brassil’s YOU RAISED ME UP if he gets a clear passage round. He was third in the same race as Thatsy but it was his first handicap. You’d imagine there is a bit of improvement in him, he jumps well and if he can arrive late on the scene he could definitely run into a place.

I am really looking forward to the Albert Bartlett which looks a cracker. There are about ten horses you could fancy, a lot of them point-to-pointers.

It’s a very competitive race and it’s going to take a lot of winning.

I’d love to see Paul Nolan, a Wexford man like me, win with Latest Exhibition. His performance at the Dublin Festival was very good where he beat Cobblers Way.

I was beside Fury Road when I rode out on Wednesday morning. He looks incredible. His run at the Dublin Festival behind Latest Exhibition was a bit better than it looked.

Turning in he looked like he was going to be beaten nearly ten plus lengths but it was actually just over five. He is a dour stayer. He was off the bridle good and proper but I think that might stand him in good stead if it turns into a real slog. Gordon’s are in terrific form and he won’t be too far away.

The one I really like is MONKFISH. He was a very impressive winner over two miles six in Thurles. He could be an improving horse. He will handle the ground and is a good old fashioned stayer.

There are only 12 runners in this year’s Gold Cup when last year there were 16. It is nevertheless hugely competitive with last year’s winner AL BOUM PHOTO.

He is coming into the race very fresh and well. He won a Gold Cup, went to Punchestown where he was beaten two lengths by Kemboy, who won at Aintree.

If you are going to come back to win a Gold Cup it’s best to have a fresh horse as Best Mate proved. I definitely think it will help.

CLAN DES OBEAUX has been well campaigned by Paul Nicholls. He went to Down Royal in November and ran very well for his first run of the year behind Road To Respect. And then I thought his performance in the King George was awesome. He was electrifying and he has been kept fresh too.

Whereas Delta Work has had two hard races in Ireland. He was a good novice last year. He ran at Down Royal in November and came back at Christmas when he beat Monalee by a head and then he beat Kemboy at the Dublin Festival.

He’s had a harder campaign. I rode him on Wednesday morning and he seemed in terrific form and Gordon is really looking forward to him. I think he has a brilliant chance.

Nicky Henderson’s horses are running out of their skin. Santini was second here to Topofthegame and that form has been well franked with Delta Work just behind him. His run the last day when he beat Bristol De Mai by three and a half lengths was very good.

You are always looking for these novices to come through in a Gold Cup but I just think the experience of AL BOUM PHOTO and CLAN DES OBEAUX will count most.

Gordon runs CHOSEN MATE in the Grand Annual. He won a beginners’ chase the last day. You might question his experience but he is a point-to-point winner and he seems to be a really good jumper at home. He could be well handicapped on the back of that beginners’ chase.

Greaneteen has won his last three and has been quite impressive but I thought he got enough of a hike the last day when he won at Fakenham. He is now rated 150 and the weight might have got a hold of him.

Gordon does target theMartin Pipe and he seems to have favoured The Bosses Oscar who is ridden by Sean O’Keeffe, a very promising rider coming through the ranks.

This horse has been lined up for the race for the last while. He would probably like a bit better ground but I am sure Sean will give him a great ride and I would be disappointed if he wasn’t thereabouts.

Willie Mullins also likes to target this race while Joseph O’Brien won it last year and I would side with his horse FRONT VIEW to sign off a wonderful meeting for J P McManus. He won a Cork maiden hurdle and then finished second to Willie’s horse Five O’Clock. He is getting six pounds off Willie’s horse this time.

mid-division, headway 4 out, tracked leaders next, driven and not quicken after 2 out, well held in 4th from last

Foxhunter is one race still missing from my cv

I wouldn't swap Le Breuil for anything in the Kim Muir

Looking to continue my Champion Bumper run on Queens Brook

Bidding to go back-to-back in the National Hunt Chase